We recently spent a lovely week enjoying Paris, France. We only speak a smattering of French, but saying “Bonjour, monsieur” as soon as you walk into a shop or sit at a sidewalk cafe paved the way.

We were treated courteously, politely and distantly. The service was provided with a smile, but with very little personal connection. The language barrier created a ravine that was difficult to cross.

Enter kindness. Kindness showed up in small ways and rather impactful ways. Kindness bridged the ravine and connected us as humans, even though we did not speak the same language.  Allow me to share two examples.

Adventures in Traveling – By the Metro, Trains & a Car

We decided to take a day trip out of Paris to the medieval town of Chartres, home of the famous Cathedral Notre-Dame de Chartres. It should have taken an hour by train, but an electrical fire the day before prevented that train from running.

We were sent to a different Metro station, to catch the train to Versailles. Once in Versailles, we were told to take “Bus 409” to La Verriere, and then take the train to Chartres.

It all sounded so simple when we stepped off the train at Versailles. What we failed to consider was that we were not the only people inconvenienced by the cancelled train.

We stood waiting for the bus, until we realized that we needed to buy a ticket. Waiting again with more people than could ever fit on the next bus, it was an hour before we hit upon a solution.

We mentioned this idea to a man and woman who were also frustrated with the wait. The man (Peter) was in his early thirties and spoke excellent English. The woman (Margaret) was older and didn’t speak a word. They managed to send for an Uber, but the car never showed up. That request was cancelled and a new driver appeared after another 45 minutes.

Of course, just as the Uber driver appeared, so did Bus 409! People jammed onto the bus, cramming into every conceivable space.

We all fit into the compact car, grateful for the air conditioning. We shared information about ourselves, our lives and our trip to Chartres. By the time we arrived in La Verriere, we were no longer strangers.

Once on the train, Margaret kept trying to tell me something. I finally understood that she was offering her iPhone charger to me, so I could charge my phone. Her thoughtfulness and sincerity were quite touching. 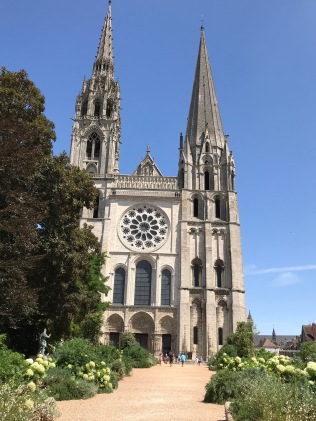 When we finally arrived at Chartres (after 5 hours!), we waived goodbye to our travel companions. Their kindness was the bridge to a wonderful travel adventure!

Waiting at the Airport

Gaulle Airport, as we were waiting to check our luggage.

It was very chaotic going through the steps to check our bags. While we were standing in line, I noticed that we happened to be in the middle of a large family. The older man and woman in front of us were talking with their grandchildren behind us. It was all in French and we couldn’t understand a word.

The line did not move forward quickly and the children were beginning to get restless. Since we had more than enough time to reach our gate, I offered for the people behind us to join their family.

Surprise then gratitude lit up their faces. It didn’t matter that we were from different countries; kindness was given and received.

About five minutes later, the grandmother came up to me and touched my arm to get my attention. When I turned to look at her, she gestured for us to move in front of their entire group! They moved to each side, creating an aisle.

I felt like royalty as we thanked them for their kindness. The only thing missing was the red carpet!

Walking past these people made me realize again that kindness is truly the universal language. It bridges differences in language, culture and religion. It reminds me of a saying that we could all remember:

Be kind. It’s your free gift to another soul who may need it.

It’s just another step in the Heart Dance!

4 thoughts on “Kindness Is the Key”