I love inspirational fiction, whether it is classified as “self-help” or “Christian Suspense.” Telling a story well and subtly teaching insightful lessons is the epitome of a great read.  Finding authors who can handle the balance between plot, characters and education is sometimes difficult.

Davis is a three-time Christy Award-winning, best-selling author. His devoted fans call him the “gentleman adventurer,”and “Renaissance Man.” Before he began writing, Davis was the consummate international businessman whose work took him to the far corners of the world. Blending his personal travel experiences with a incisive wit and wisdom about human nature, his books have been translated into sixteen languages and sold more than seven million copies.

But the element that sets him apart is his Christian faith.

Unlimited is his lates 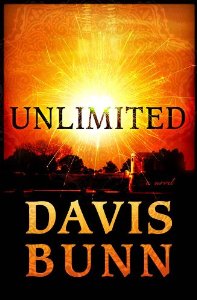 t creation.  The internal struggle of the hero, Simon Orwell, mirrors the conflict of many people. He walks around confidently, but inside he is a seething mass of self-doubt, recrimination and guilt.  It is only when Simon is presented with a clear decision to help others at the sacrifice of his own interests that he discovers the truth about himself.

Without giving away too much about the plot, the book is an intriguing combination of a murder mystery that can only be solved by faith in God.  Simon’s choice to step forward in faith (even though everything in his world is telling him to do the opposite), is a compelling example of unlimited belief in something greater than self.

Soon to be released as a major motion picture, Unlimited is thought-provoking, compelling and inspiring.  As an added bonus, click on the link below and read the first three chapters of Unlimited. No hooks or gimmicks, just great story telling!